Walking on the Saint James Way.

Home/Walking on the Saint James Way.

Walking on the Saint James Way.

The Camino de Santiago de Compostela across northern Spain is one of the world’s oldest pilgrimage routes. For more than 1000 years, pilgrims from all over Europe were attracted by the grave of the Apostle James the Great at Santiago de Compostela at the far North-Western tip of Spain, where his tomb is said to be discovered in the 9th century.

In 1987, the Saint James Way was declared the first European Culture Route and today, both hikers and cyclists from around the world follow the pilgrims trail and are impressed by the experience, whether from a spiritual, cultural or sportive point of view. The St. James trail is an unforgettable journey. A way of encounters, strain, rest, reflection and the origin of the European Idea some even say. 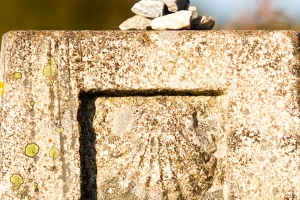 The way is marked by the symbol of the scallop shell, typically found on the Galician shores, and the grooves in the shell that join together are said to represent the many different ways pilgrims travelled from to reach the tomb of Saint James.

The “Camino francés” (French route) is the most popular route passing through the very diverse countryside in Galicia. A series of splendid monuments from Romanesque bridges to Baroque Cathedrals will make your day. 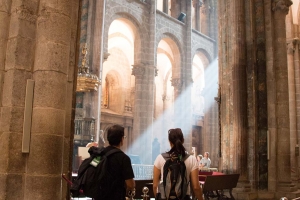 We are one of the leading agencies in the different sections of the Pilgrims’ Route to Santiago and we offer groups and individual walkers the possibility of walking from accommodation to accommodation without having to carry their luggage, if they prefer, since we also provide an efficient luggage transport service.

We take into account the viability of each route and how it adapts to all ages and physical conditions, considering the hills, land, length of the stages and the ideal time of the year for doing the route…The main aim of our walking options is to provide clients with a comprehensive service, not necessarily only for walkers, but also for nature enthusiasts.