The Autonomous Community of Castilla y León occupies an area of 94,223 km² and contains the provinces of León, Zamora, Salamanca, Palencia, Burgos, Soria, Valladolid, Ávila and Segovia. It has a population of 2,558,463 (figures from 2011). Nature gave these lands wonderful lakes all across its geography: Laguna Negra in Los Picos de Urbión, Laguna Grande in Sierra de Gredos, Lago de Sanabria in Zamora and Laguna de la Nava in Palencia. History led various cultures to this land and they have left their marks in monuments that remain today: the bulls of Guisando, Iberian; the aqueduct of Segovia, Roman; San Pedro de la Nave, Visigothic; the Castle of Gormaz, Arabic; San Miguel de Escalada, Mozarab; San Martín, Romanesque; the cathedrals of Burgos and León, Gothic; the University of Salamanca, Plateresque; the church of La Clerecía, Baroque; and the castles (Medina del Campo, Peñafiel, Simancas, Coca, Torrelobatón, Arévalo, Fuensaldaña…), which are reminiscent of the long Reconquest. Monumental jewels that will always make visitors happy to come back.

The Way of St James in Castilla y León is a long route that crosses the community horizontally, in its northern third, from East to West. It arrives in Burgos from La Rioja, crossing the province to reach Palencia and, finally, León. Some of the most important Romanesque buildings, not only in the Autonomous Community of Castilla y León, but in all Spain, were built on this section of the Way of St James, such as the churches of San Juan de Ortega, San Martín de Frómista and San Isidoro de León, etc.

In Castilla y León, the Silver Way runs through the Sierra of Béjar, the countryside of Salamanca, crossing the cities of Salamanca and Zamora to enter the area known as La Maragatería. This route originates from the Roman road of the Silver Way which, according to the 12th itinerary of Antonino Caracall, connected Emerita Augusta, known today as Mérida, with Asturica Augusta, modern-day Astorga. The gastronomy of Castilla y León combines traditional recipes, which maintain their dishes and ingredients intact, with nouvelle cuisine.

The gastronomy is abundant and very varied. One of the most typical dishes in Castilla y León is roast suckling pig or lamb. The cuisine also offers excellent raw materials for making succulent dishes, including pulses (haricot beans, red beans and black beans and chickpeas, as well as lentils, especially those from La Armuña, which are protected by a Designation of Origin), cereals, river fish, such as trout, big and small game, vegetables, fruit, dairy products, such as sheep’s milk cheese, cows milk and goats milk, meats, which are used for the roasts and stews, and cold meats and wine. Its cakes and pastries include traditional sweets made by the monasteries and convents of each province, such as the Yemas de Santa Teresa, Toscas de la Virgen, Bizcochos de San Lorenzo and Virutas de San José, etc.

The walls of the city date from mediaeval times. The Gothic-Romanesque cathedral, the Royal Monastery of Santo Tomás and the Palace of Oñate and church of San Juan are must-sees for tourists before leaving the town. The Bulls of Guisando, in the village of El Tiemblo, are one of the most important examples of Celtiberian art. However, Ávila is particularly famous as the birthplace of mysticism, mainly due to St Teresa of Jesus, one of the most exceptional figures in Spanish religion.

Its wonderful Gothic cathedral is world famous and it is one of those monuments that give the town character and charisma. The Arch of Santa María, which was once a gate to the town, is today the best porch for entering the cathedral. The House of El Cordón dates from the 15th century and is also well-known and worth a visit. It was the place where the Catholic Monarchs received Christopher Columbus on his return from his second voyage to America. The Monastery of Las Huelgas and the Carthusian Monastery of Miraflores complete the important collection of religious architecture.

León is more than a city, much more than a province; it is a kingdom. Its history is nourished by walls and conquests. It was finally annexed to Castile in the 13th century.
León has excellent monuments of priceless artistic value. The cathedral is a magnificent example of Gothic art. Its construction began at the beginning of the 13th century and its stained-glass windows are unique, together with its extraordinary large rose window on the west facade.
The Basilica of San Isidoro is a Romanesque monument from the 12th century. The Pantheons of the Monarchs of León can be found at the back of the church. The Convent of San Marcos, which was once a hospital for pilgrims on their way to Santiago de Compostela, has a monumental Plateresque-style facade and has been turned into a luxury hotel.
Other works of great architectural value include the Palace of Los Guzmanes, the House of Botines (by Gaudí) and the Palace of Los Condes de Luna.

Situated on the plains of Tierra de Campos on the banks of the River Carrión. The city’s large historical and artistic heritage includes the Cathedral, the Plaza Mayor and the Town Hall building, the Palace of the Provincial Council, the House of El Cordón, which is home to the Archaeological Museum of Palencia, the Monastery of Santa Clara, the Church of San Miguel and the Christ of El Otero, which stands on one of the hills near the city.
Its Holy Week celebrations and the local pilgrimage of Santo Toribio are of particular interest.

Valladolid stands on the left bank of the River Pisuerga and is the seat of the parliament and government of the autonomous community of Castilla y León. The Plaza Mayor, the Royal Palace, the Palace of Los Condes de Benavente, the unfinished cathedral, the historical building of the University, the Palace of Pimentel, the Palace of Santa Cruz, the church of San Pablo, the convent of San Francisco, the National Sculpture Museum, the Museum of Christopher Columbus and the House-Museum of the poet José Zorrilla are examples of the excellent monuments to be seen in Valladolid. Holy Week is the most important cultural event in the city thanks to its priceless polychrome statues that date from the 16th and 17th centuries. Gregorio Fernández, a Spanish sculptor from the Baroque period and one of the best examples of the Castilian School of sculpture, worked in close collaboration with the brotherhoods of Valladolid from when the city was named as the capital of the Royal Court until his death.

Madrid, Segovia is the watchtower and observation post of the Guadarrama Mountain Range. It is also has a strong connection with the Roman Empire: the aqueduct. This impressive monument nourishes our ideas on the past and makes us think of its great influence during that historic period. Its 118 arches strengthen its appearance as a colossus. The old town of Segovia and the aqueduct were designated World Heritage Sites by the UNESCO in 1985. The Alcazar and the Gothic Cathedral are other outstanding monuments in Segovia. The Royal Palace of La Granja de San Ildefonso is one of the residences of the Spanish royal family and is located in the Segovian town of Real Sitio de San Ildefonso. Six kilometres in length, the gardens surround the palace and are one of the best examples of garden design from 18th-century Europe. They contain 26 monumental fountains, all with fantastic water games and their own mythological characters and legends. We could say that, in the same way that mythology in Versailles is dedicated to Apollo, who represents the sun, in La Granja, it is dedicated to Diana, who represents the moon.

On the banks of the upper section of the River Duero stands the town of Soria, with its superb collection of religious monuments in Romanesque style (Church of San Juan de Rabanera, Church of Santo Domingo and Co-Cathedral of San Pedro) and other styles (Shrine of San Saturio). The civil monuments in the town include the castle and the Palace of Los Condes de Gómara.Eight kilometres from Soria, tourists can visit the remains of Numantia, an ancient town that heroically resisted against the invasion of the Roman legions.

This is the university city par excellence. A city that is a museum. A city that is wise. The Old Cathedral is home to the statue of La Virgen de la Vega, which dates from the 13th century and is the patron saint of Salamanca. The University of Salamanca was founded around 1218 and the building has a wonderful facade in marvellous Plateresque style. Other monuments and centres of interest in this fascinating city include the New Cathedral, the Plaza Mayor, the House of Las Dueñas, the House of Las Conchas, the Student Residence of Arzobispo Fonseca, La Clerecía and the Pontificia University. Salamanca is crossed by the River Tormes and strolling along the riverbank is one of the outdoor activities on offer. The River Tormes is not simply a river that flows through the city; it is a living part of it. La vida de Lazarillo de Tormes y de sus fortunas y adversidades (better known as Lazarillo de Tormes) was the first picaresque novel of Spanish literature and Lázaro or Lazarillo de Tormes was called by that name because he was born on the River Tormes.We can say that Salamanca is one of the university cities par excellence, which also makes it internationally famous. The University of Salamanca has great prestige and a very important capacity for attracting students. Museums, music, dance, street shows, exhibitions, etc., Salamanca has an endless array of attractions for all kinds of tourists, since the city awards priority to activities that are related to leisure and tourism. However, cultural events also take place throughout the year, together with congresses and one-day events on a variety of subjects. The star period of Salamanca for students is summer, when thousands of young people come to attend courses on Spanish for foreigners and the university’s summer courses.

Crossed by the River Duero, the old town area has been designated an area of Historical-Artistic Interest. It has a collection of Romanesque buildings that is the largest on the Iberian Peninsula and one of the most important in Europe. It contains the cathedral, twenty-four churches, a castle, walls, a bridge, two palaces and nine houses, which is why Zamora is considered to be “the town of the Romanesque style”. Its festivals include Holy Week, which is an event of International Tourist Interest. 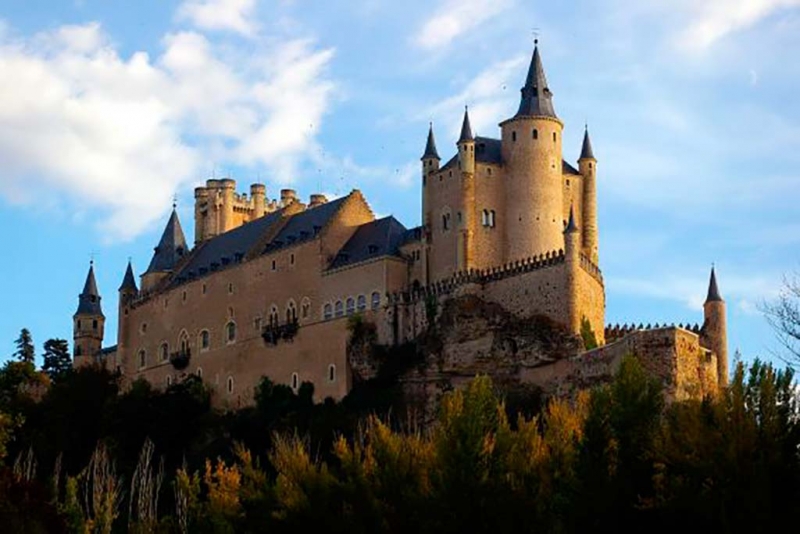 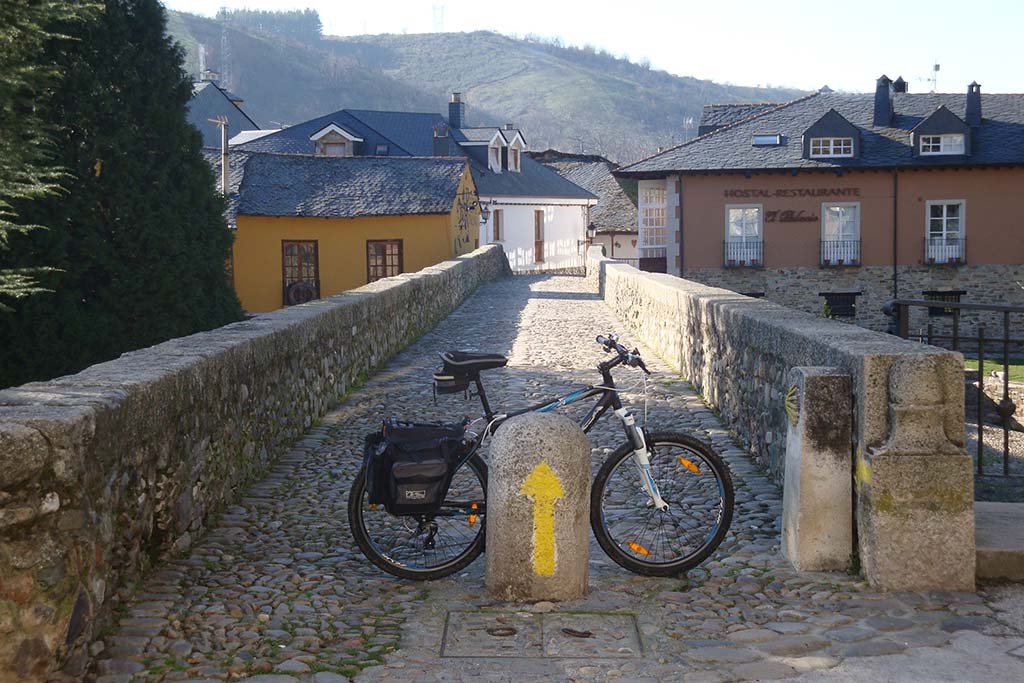 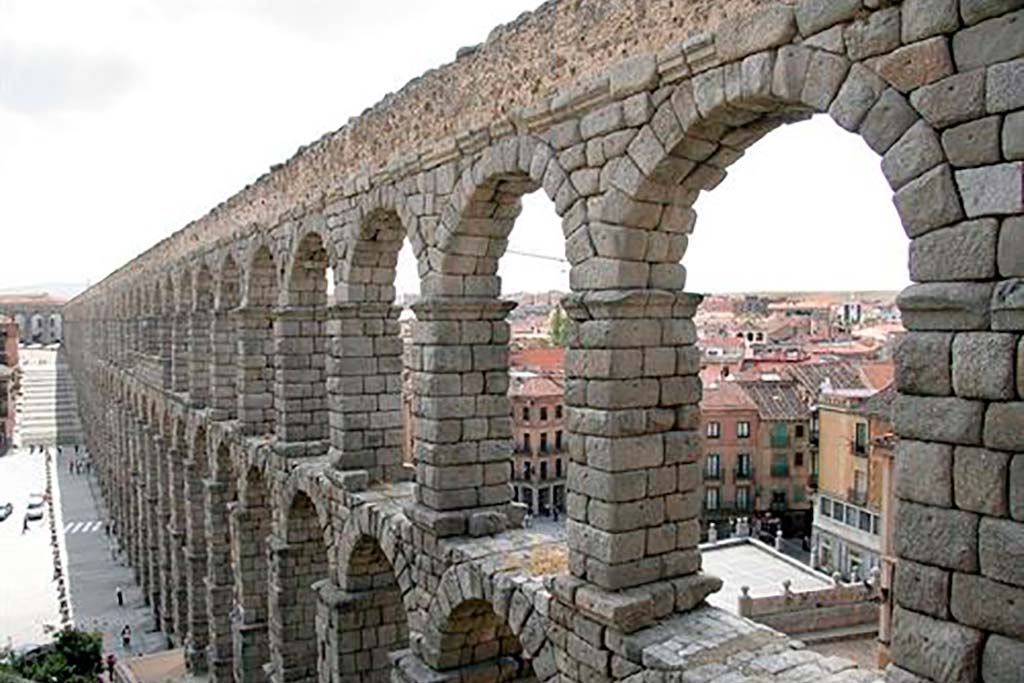 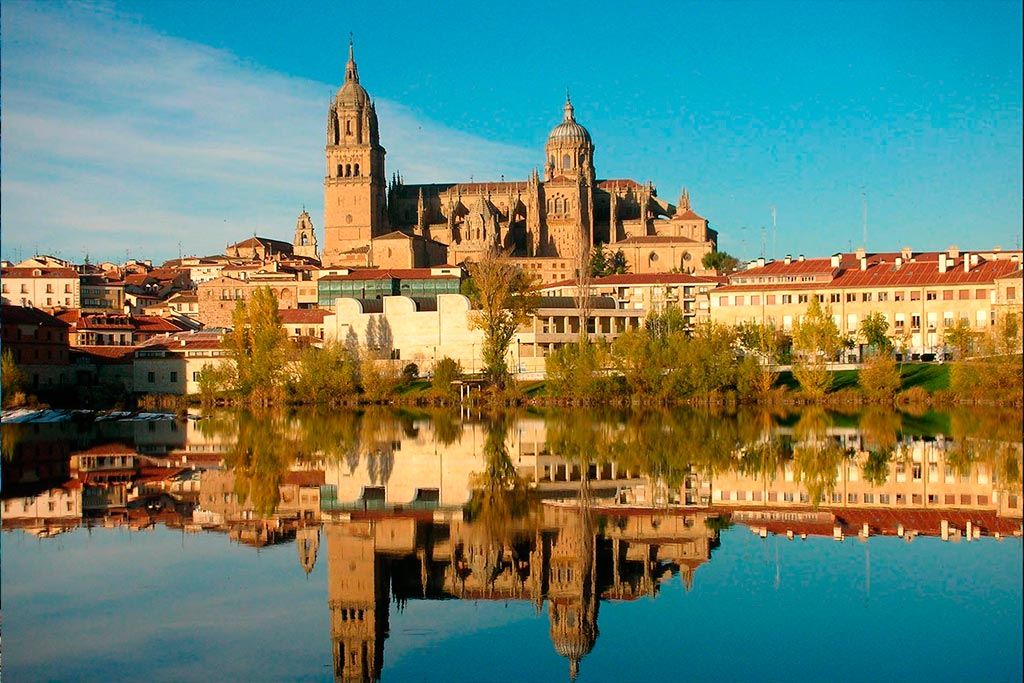 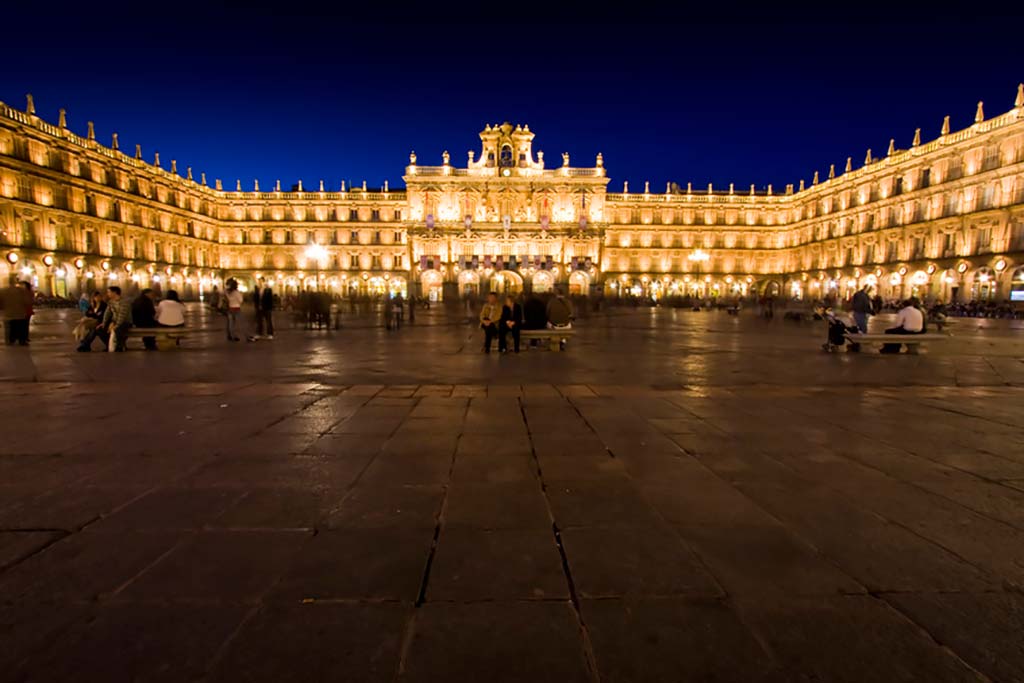 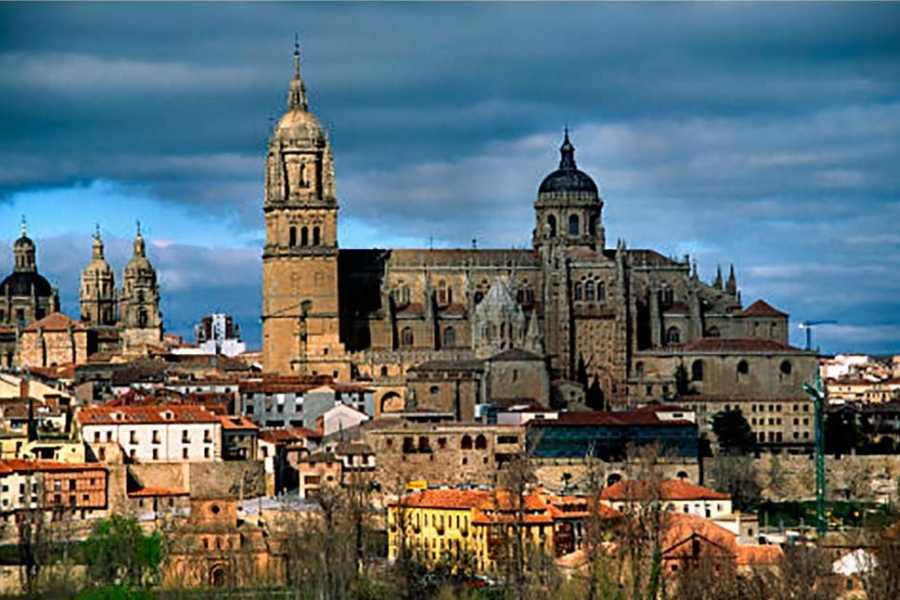 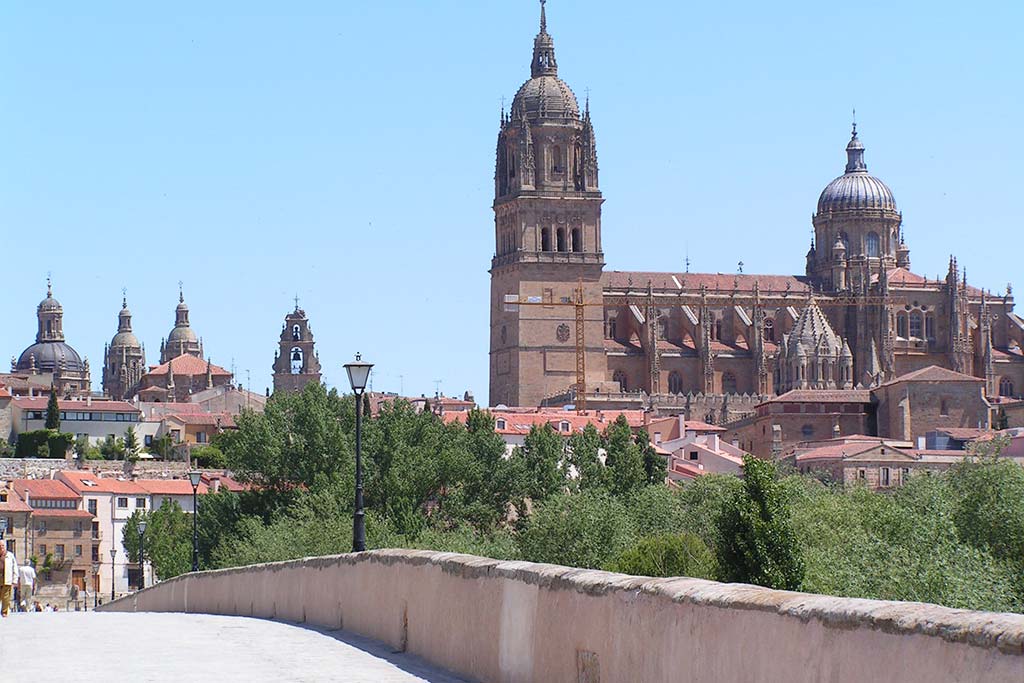